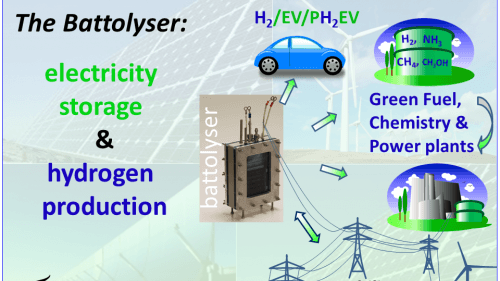 For the first time, TU Delft researchers led by Prof. Fokko Mulder have produced an integrated battery electrolysis system – known as a ‘battolyser’ – that can not only store or supply electricity efficiently as a battery but can also split water into hydrogen and oxygen using electrolysis. This week the first article about it was published Energy & Environmental Science, and a research programme has been awarded funding by the Technology Foundation STW with the support of several companies.

There is an increasing amount of sustainably generated electricity in the form of wind and solar power, but it is not available whenever we want it. Large-scale electricity storage facilities are therefore needed, both for short-term (day and night) and long-term (weekly or seasonal) storage. Batteries are best for short-term storage, whereas artificially produced fuels such as hydrogen are most suitable for long-term energy storage.
‘Electricity and hydrogen have always been regarded as two separate, even competing, solutions for energy storage,’ said Mulder. ‘With the battolyser we have the first integrated battery electrolysis system, which can store and supply electricity very efficiently as a battery, and when the battery is full, it automatically starts splitting water into hydrogen and oxygen using electrolysis. By combining battery technology with electrolysis, we achieve an outstanding overall efficiency of up to 90%. The battolyser has also been found to be stable, both in battery and electrolysis mode, even under long, intensive charging, discharging and hydrogen production.’ 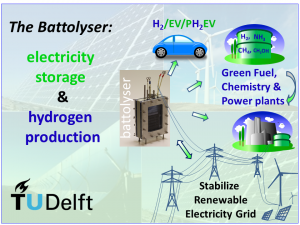 How does it work?

The battolyser is based on the ‘nickel-iron battery’, a type promoted in the twentieth century particularly by Thomas Edison. Mulder commented, ‘It’s a very robust battery. Original examples are still working. Also, the raw materials are cheap and obtainable anywhere.’ While the battery is charging, the electrodes produce two materials (NiOOH and reduced Fe), which are familiar in the world of electrolysis as a catalyst for the chemical reaction that produces hydrogen and oxygen. Thus, the electrodes, in their charged state, enable water to be electrolysed.

The fact that nickel-iron batteries also produce hydrogen gas while charging was always regarded as a drawback, explained Mulder, and that was one of the reasons why other types of battery were ultimately more successful. ‘With the battery world and the hydrogen world (solar fuels) in competition and not learning much from each other, no-one has ever tried to combine the two and see whether it would be worthwhile – despite the fact that we need both battery storage and fuels.’ Mulder therefore built an initial brick-sized prototype with Bernhard Weninger, a student of his. ‘It worked straight away. As soon as the battery approached full charge, it started producing hydrogen,’ said Mulder. ‘In simple terms we are taking advantage of what nature does automatically. We’re making smart use of the materials’ natural properties without fighting against them.’

Electricity supply and demand in equilibrium

The unique feature of the nickel-iron system is that the electricity storage and the hydrogen production are both very efficient, so the system is a good way of handling the variability in power availability and prices. Mulder commented, ‘If there’s plenty of power and the price is low, we store it; if there’s even more cheap power, we make hydrogen. And if there’s not enough power, making the price high, we feed power back.’ Thus the battolyser is effectively in service the whole time, supplying two functions for the price of one. The hydrogen gas produced can subsequently be used as fuel for fuel cells or gas-fired power stations or as a raw material for the chemical industry, for example for the production of ammonia.

The next steps involve research into further improvements in efficiency and scaling up what we already have. The Technology Foundation STW has awarded funding for the research programme, and various companies are investing in the research.

As John Nijenhuis, TU Delft’s Technology Transfer Officer, pointed out, ‘The battolyser needs to be scaled up to the size of a shipping container to prove that the technology is also suitable at the scale of the power produced by a large wind turbine.’ The aim is to have the large battolyser ready and tested within eighteen months.
Research Engineer Yasmina Bennani of Proton Ventures, an engineering consultancy specialising in ammonia production, storage and transport added,  ‘Hydrogen is our raw material, so we are very interested in ways of producing green hydrogen. The battolyser is unique in that it is also a battery – a good combination, which is particularly efficient for us.’
Technology Coordinator Geert Laagland of the electricity utility Nuon envisages using the ammonia produced from sustainable hydrogen as the future fuel for the modern Magnum power station at Eemshaven. ‘If there is not enough wind and solar power, we can use the ammonia to supply clean power on a large scale immediately. Nuon is a member of the STW user group. We’re very curious about cost price, of course, but also flexibility. How quickly can you switch over?’

Large-scale consumption of green electricity will only increase

‘What a lot of people don’t realise is that we’re not only switching to green electricity but we’re also going to use far more of it,’ stressed Mulder. ‘‘Households are switching away from gas, cars are becoming electric, and by 2050 industry will be carbon neutral. Lots of processes are far more efficient when electrically powered. Electric cars and heating, for instance, could use as much as 80% less kWh of energy compared with petrol and gas. On top of this, more and more sustainable energy sources are electrical. We shall therefore be using three to five times more electricity than at present,’ estimated Mulder, and at the same time we shall be saving energy (currently only 13% of all energy is used in the form of electricity). To achieve this sustainability and improvement in efficiency, however, power needs to be available throughout the year. ‘The battolyser provides us with an efficient, cheap, large-scale, robust way of storing electricity that can be switched back and forth between electricity and hydrogen as often as is needed. Thus, the battolyser is the first to bring together naturally the electricity storage infrastructure and the hydrogen gas production infrastructure.’