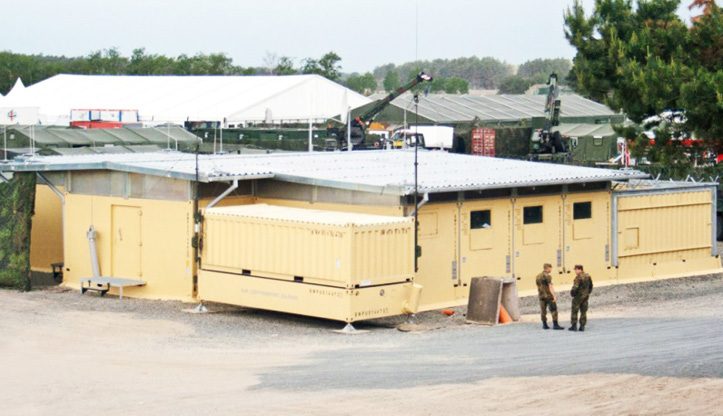 For the first time in history Dutch Forces have chosen to use a sustainable power system for the power supply military camp. The system in deployed in a part of Camp Castor in us by the Dutch soldiers contibuting to the UN-operation MINUSMA in Mali. EST-Floattech is proud of delivering this system, particulary because it operates there under challenging climatic circumstances.

The foundation stone for the Deployable Power Module is the EST-Floattech Lithium Polymer Battery. In packages of thirteen, they are used for the storage of energy.  Depending on the availability of solar power and the level of electricity consumption, this energy is either obtained from coupled 250 kW generators or from coupled flexible “Thin Film” solar panels from partnering company Zonel Energy Systems. This particular type of solar panels was deployed for the first time during the operation in Afghanistan. The Dutch Engineers were pleased with its performance and wanted to use them in MALI again. Just as in Afghanistan the solar panels are installed on the roof top of the chalets. Besides batteries the Deployable Power Module system contains tailor made software as well as modern industrial conversion equipment.

The Lithium Polymer Batteries are charged primarily by the solar energy obtained by the solar panels. If necessary, charging can be replenished by energy coming from the coupled generators. Power supply to the different parts of the camp is always provided by the battery packs. The Deployable Power Module automatically decides if charging has to be done by the solar panels or by the generators. Moreover the system pre-plans when generators have to be in operation enabling the generators to operate in their most effective mode, that is at 85% of their power.

TECHNICAL INNOVATIONS IN USE OF THE DEPLOYABLE POWER MODULE

The two most important technical components enabling the reliable performance of a sustainable power system like ESTechnologies Deployable Power Module are the performance level of the battery and the reliability and efficiency of the Energy Management System.

BENEFITS OF THE DEPLOYABLE POWER MODULE