World Energy Council: storage is less expensive than we think 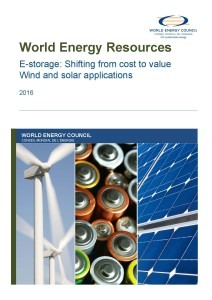 A narrow focus on ‘levelised cost of energy’ (LCoE) can be misleading when looking at the business case for energy storage. This is one of the major conclusions of a new study E-storage – shifting from cost to value carried out by the World Energy Council into the real costs of energy storage. The report is calling for the true value of energy storage to be recognised by taking into account both its cost and revenue benefits.

Storage has often been described as the Holy Grail of the transition to a low-carbon energy system. Affordable, efficient storage would enable variable renewable energies to be better integrated into electricity systems, it would greatly improve the economics of home solar systems, even allowing people to go off-grid, it could help catalyze a revolution in electric cars and it could solve problems of grid overload. The problem is that this Holy Grail is still eluding us, because storage is too expensive.

But is it? There are reasons to believe the cost picture for energy storage is actually considerably brighter than what is commonly understood. A new study from the World Energy Council shows that the LCoE metric, which is used as a standard in measuring electricity generation costs, can be highly misleading when applied to energy storage. The most important reason for this is that this formula ignores the revenue side – in other words, it fails to take into account the value that storage can bring.

The cheapest technologies might not necessarily deliver the greatest value

In electricity generation, revenues are fairly easy to measure and compare, but when it comes to storage, the value supplied varies depending on the application, so the report shows. For example, storage can enable suppliers to deliver energy at specific hours, when the price is higher. It can also provide generation capacity that is needed in certain circumstances. Or it can allow users to go completely off-grid, which can be beneficial in rural or isolated locations. There may also be additional indirect benefits, such as greater security of supply or reduced price volatility.

According to Hans-Wilhelm Schiffer, Chair of the World Energy Resources study group, which coordinates 15 Knowledge Networks within the World Energy Council, including the fairly new Storage Knowledge Network, storage should be viewed as a totally new, separate element in the energy system. “There are four different elements in the energy system: conventional and renewable generation, grids, customers and storage”, he says. “You cannot simply apply LCoE values of, for example, conventional generation to storage applications.”

Schiffer gives the example of a village where a diesel generator is replaced by a solar-plus-storage system. “Storage in this case can increase reliability, help reduce air pollution, lessen dependence on external sources, help integrate other new renewable sources. LCoE alone does not capture these benefits.”

According to the study, the preoccupation with cost is a hangover from the renewables industry, “which tends to have a narrow focus on LCoE due to benefiting from policy mechanisms which derisk its revenue streams”. In addition, it has to do with the fact that “in most energy markets, flexibility is not sufficiently valued or monetised”.

Costs of storage set to decline 70%

The Storage Network’s study not only shows that a narrow focus on cost can be misleading, it also concludes that costs will come down rapidly in the coming years!

The findings show a significant drop in cost for the majority of storage technologies from 2015 to 2030. Battery technologies show the greatest reduction in cost, followed by sensible thermal, latent thermal and supercapacitors. Battery technologies show a reduction from around 100-700 €/MWh in 2015 to 50-190 €/MWh in 2030; this is a reduction of over 70% in the upper cost limit in the next 15 years. Sodium sulfur (NaS), lead acid and lithium-ion technologies are leading the way. Pumped storage shows the lowest cost reduction, due to the current maturity level of the technology, followed by compressed air energy storage.

Schiffer says policymakers and regulators should look at the broader picture when designing regulatory frameworks. “Storage is usually not getting the same kind of policy support as renewables or as other flexibility options like demand response. In many countries energy storage is seen as belonging to end customers. That means: the electricity which is taken into storage is charged with dues and fees, in addition to the dues and fees the customer has to pay on electricity. This is a double burden which is not justified. We believe there should be a level playing field. And more should be invested in R&D.”

The study has led the authors to make three broad recommendations for policymakers:

The study can be downloaded Resources-E-storage-report-2016.01.14_final_version.